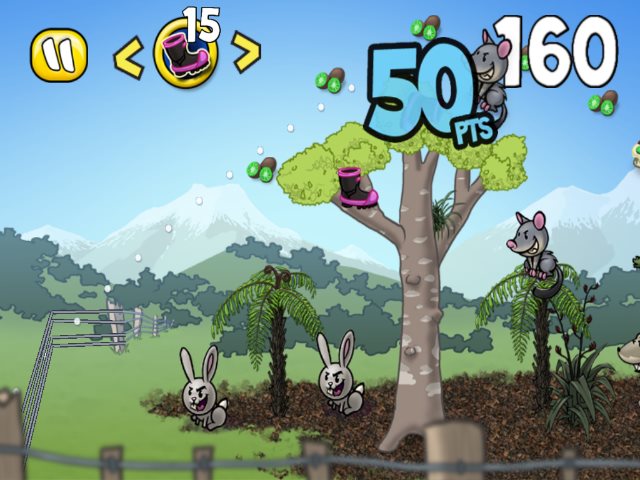 To help promote the industry and its responsible dairying commitment, DairyNZ wanted to create a fun, educational game tied to theRosie’sWorlduniverse that would appeal to children and promote specific farming values. That concept becameGumboot Glory, developed by InGame and King St Advertising.DairyNZ is an industry body funded by dairy farmers. Their purpose is to enhance the profitability, sustainability and competitiveness of New Zealand dairy farming. For several years it has run a successful education programme which has consisted of an online component, Rosie’s World that directly targets children, and a teacher focused component using dairy related educational resources that are linked to the New Zealand Curriculum.

Previously DairyNZ targeted children through online mini-games. Feedback from students and teachers was that while the mini-games were good, childre’s expectations for gaming are much higher than ever before. They’re used to playing games made by professional development studios with significantly larger budgets and they now expect a certain quality. Recognising this, DairyNZ and King St set out to create something bigger with higher production values that, for the first time, would also target smartphones.

The 2014 educational theme for Rosie’s World focuses on four categories of responsible dairying; environment, animal welfare, community and economy. By creating a game based around these pillars, DairyNZ would be able to help children learn about these areas in a fun and interactive way.

Gumboot Glory’s concept was considered low risk because it was similar to the popular Angry Birds game. But this presented its own challenge in that it had to be at least as good, or have an original take, even though Angry Birds was created on a much larger budget. Today many children live on a diet of American and other international games so it was important for DairyNZ to base the game around recognisable New Zealand landscapes, gumboots and pests. And by making the game environment non destructible, players have the extra challenge of having to be more accurate – which keeps them coming back for more.

Because game development is iterative there’s a prototype, a beta and then a final version. There are opportunities to receive feedback and refine certain aspects of the game as you move through the development cycle. Deciding in advance that the game would be available on both a web browser and smartphones allowed certain efficiencies to be made.

From start to finish the project took two months to compete. The game was launched with a competition on the Sunday morning children’s TV show, What Now. This encouraged children to play the game and get answers for an online quiz to win prizes.

Gumboot Glory launched on Sunday 23 February 2014 and saw over 10,000 people play the game in its first month. Through analytics, DairyNZ could see how many children were interacting with the game and for how long they were playing it. 25% of players came back and played the game a second time and the average time they were engaging with the game was seven minutes.